Open for Public Worship 9.30am Sunday 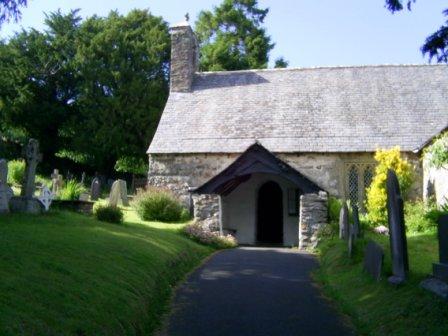 The Welsh word llan means ‘enclosure’ in English. The current Church was built in the late 14th and early 15th centuries, on the site where Peter Pedr first set up his Church in the 6th century. Those first llans were sacred enclosures, established by the early Christian Saints as places of encounter and transformation. 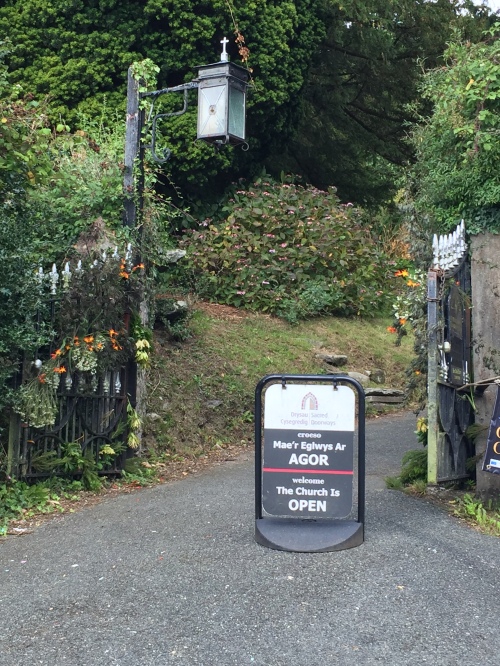 Llanbedr-y-Cennin means the Church of St. Peter among the Daffodils, and Spring typifies this lovely old country Church with its profusion of flowers that greet all who enter. The Daffodil symbolises rebirth and new beginnings. It truly is a place of natural beauty in the Conwy valley and dedicated to worship since the 12th century. St. Peter’s Church has been used by family and friends for centuries to worship God, and share in the joy of a wedding or a baptism. It’s located just up the road from Ye Olde Bull Inn. The village of Llanbedr-y-Cennin was built around the Church, which still today offers the warmth of fellowship in God’s love from a small, but growing congregation.

Click here for the Church in Wales’ Book of Common Prayer (Daily Prayer 2009). 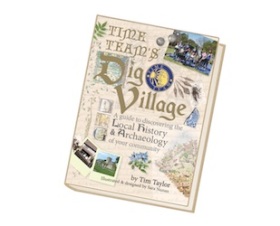 The Church features in Tim Taylor’s book Dig Village (published 2019). Frances Barr, a member of the congregation from childhood, was the production coordinator, providing editorial support and project organisation. The book is a hands-on guide to discovering local history and archaeology in communities. It contains beautiful illustrations from Sara Nunan.

Bishop Andy presided and preached at the Eucharist on the second Sunday of Epiphany. 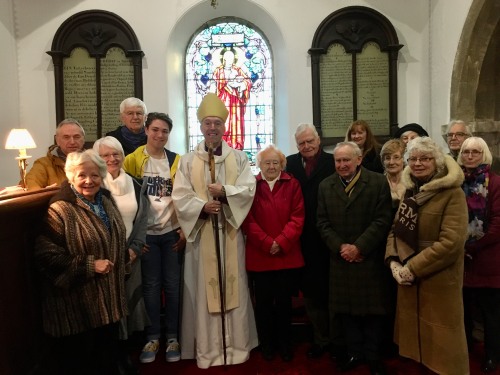 The Church, which started life as an early Celtic cell, has records of a vicar as early as 1384. Black timbers, which are thought to be from the Spanish Armada, were used in  renovations in the 16th century. It was extensively renovated in 1842-43 with works to the roof, arches, fittings and windows, which was marked by an engraving of those dates under the wooden lid of the font bowl. The 13th century font faces you when you walk through the door, and it is still used for baptism today. 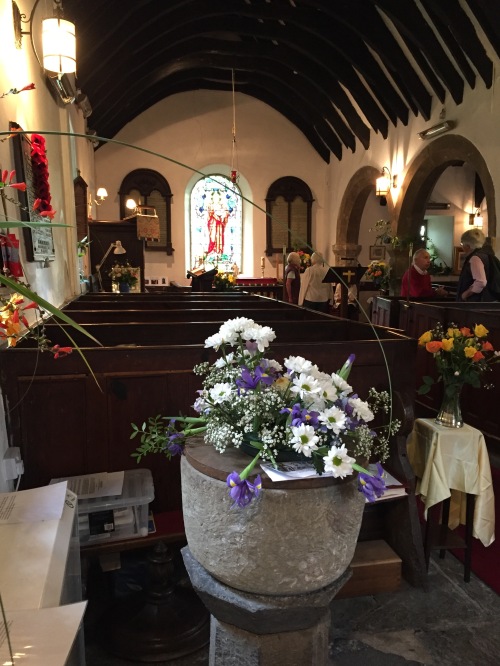 From the beginning of the Christian Church, baptism has always been the way that a person becomes a Christian, and joins the Church family. The Gospels explain how Jesus was baptised in the River Jordan by John the Baptist, and then he taught his disciples to baptise people around the world, so that the people could be born again of water and the Holy Spirit, before they entered His kingdom.

We pray for Christians that we know, as well as those we don’t know who are seeking a living faith. Even today, Christians are still being persecuted, especially when they’re in the minority. No matter where you live in this world, it’s important to remember that you’re always part of our worldwide Christian family, and you’re very much loved.

A striking, stained-glass portrait of Christ the Good Shepherd above the altar fills the East window aperture. It was made by Henry Gustave Hiller in 1907, and is based on Saint John 10. 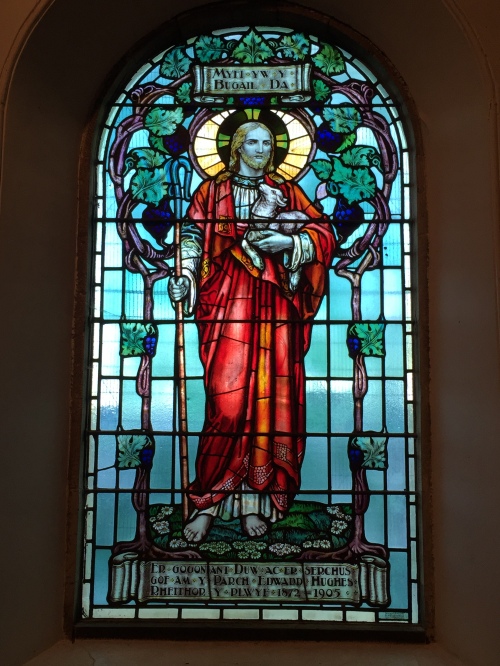 Jesus cares for all of us. We are His sheep, and He wants to bring the lost and hurting to safety. In this beautiful window, you will notice a grapevine growing around Jesus. Open the Bible, and read the Gospel according to Saint John (15: 1-17). Jesus will reveal a message to you in this passage. He is the vine, and we are the branches.

The Lord’s Prayer Ein Tad and Creed are written in Welsh on 17th century prayer boards on either side of the altar. When you look at these prayer boards, try to reflect on your own beliefs. If you don’t speak Welsh, can you say the Lord’s Prayer in your own language? The Book of Common Prayer, that’s in use by the Church in Wales today, has red, green and blue volumes, containing Welsh, English and bilingual texts. Do you know the difference between them? 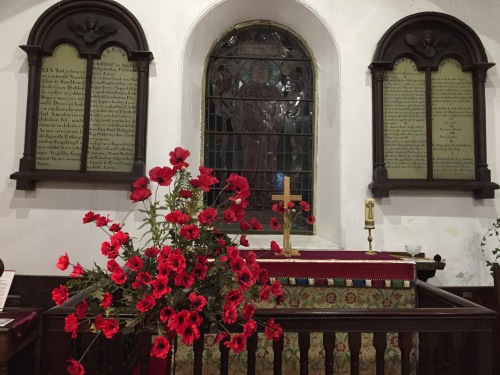 There is a display cabinet in the Church, which contains a copy of Bishop Parry’s Welsh Bible from 1620. Bishop Richard Parry lived from 1560 to 1620. It is one of 800 copies that were printed for Welsh Churches. Bishop Richard Parry and his Curate John Davies updated the original Welsh translation. The copy is known as the Miller’s Bible, because it was in the Tal-y-Bont mill in the late 18th century. The miller at that time was known as Shôn Ffidl Dwrch, because he played the fiddle and caught moles, hence the colloquial name of Ffidl Dwrch. Ffidl and Twrch are the Welsh words for Fiddle and Mole, respectively. Shôn was the Church sexton and looked after the Church and Churchyard. The word sexton means custodian of sacred objects. In a note, which was signed and dated 1903, Peleg Jones talks about his father being a frequent visitor to the mill where the Bible was kept and buying the Bible from Shôn. His father then rebound the Bible to how it is today. It wasn’t until 1964, that one of Peleg’s descendants kindly returned the Bible to St. Peter’s Church. The case that holds it is dedicated to Evan Jones and daughter, who were both sextons for more than 60 years. A note has been found in the Bible stating that John Pritchard was the owner of the Bible in 1795. Was this John the Miller, also known as Shôn Ffidl Dwrch? We will probably never know! 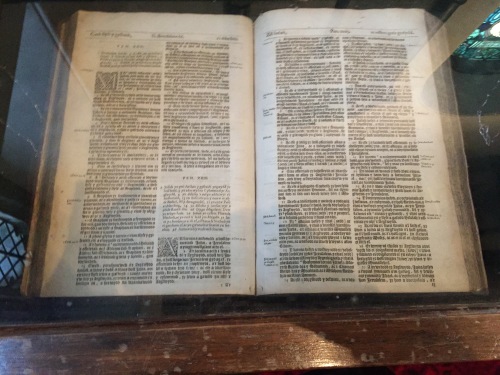 The Bible is a library of books that were written by 40 authors over 1,400 years. How much of the Bible have you read? The four Gospels in the New Testament are like news bulletins, covering the life, death and resurrection of Jesus Christ. The reason why there are four, is because God wants to provide different perspectives, so that people can see the whole picture:-

An ancient and remarkable artefact can be found in a recess under the South window. It is a medieval chest, that has been hewn out of solid oak! Was it used to put the Church treasures in? What are your treasures? Read and reflect on the Gospel according to Saint Matthew (6: 19-21).

Aldwyth Katrin Williams was the organist in the early 20th century. She was the only daughter of the Reverend Robert Williams, who was the rector of Llanbedr-y-Cennin. During the First World War, she volunteered at Red Cross military hospitals in Llandudno, and travelled there three times a week to treat wounded servicemen. She contracted influenza in 1918 and died, aged 26, shortly before the Armistice. Her grave is on the Great Orme in St. Tudno’s Churchyard. Look at the war memorials and give thanks to all those people who served their country during those times. How can you serve your country now?

The beauty and special atmosphere of Llanbedr-y-Cennin has long attracted visitors. It is a place that frees you from your worries, and famously hosted an Artists’ Colony in the 19th century. Ornithologists are drawn to the Churchyard by a range of birdlife, especially hawfinches. Read and reflect on the Gospel according to Saint Matthew (6: 25-34).

At the rear of the Church, there are raised benches, where children were educated. In his will of 1718, Reverend Launcelot Bulkeley made provision for a Charter School where six boys received free lessons. When you leave, it’s worth sparing a thought for those poor  boys who were educated in those hard, raised pews at the back of the Church! What lessons would you like children to learn today? 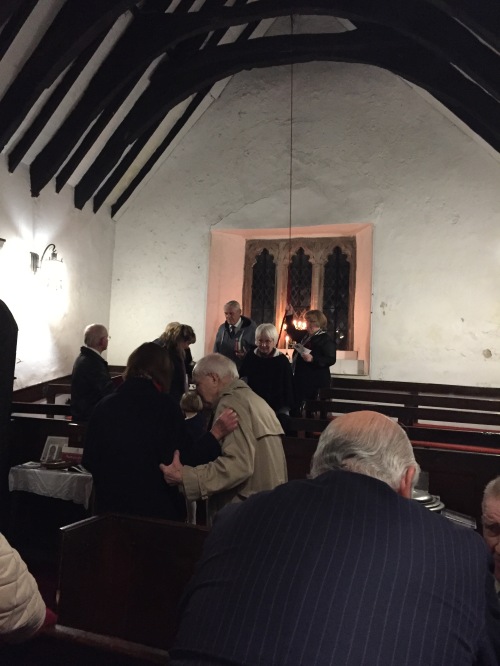