Canu cloch yn yr Hen Eglwys Llangelynnin am 12.30. Ringing the bell at Llangelynnin Old Church at 12.30. All the Church bells in the country rang out in celebration of the Centenary of the end of the First World War.

The End of Season Communion Service at 3pm on 21st October was well attended. Our reflective Services of Celtic Prayer and Praise have been very popular throughout 2018. All were welcomed at God’s table, high on the hills above Henryd.

A wonderful celebration of God’s harvest was held on 16th September. 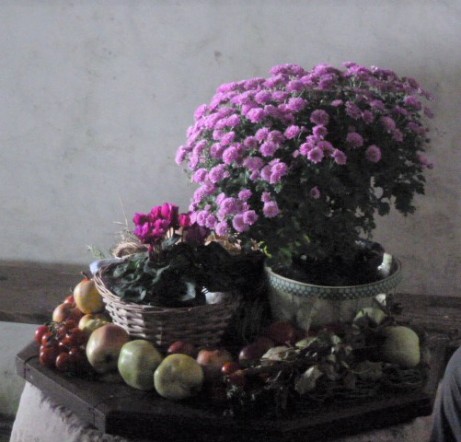 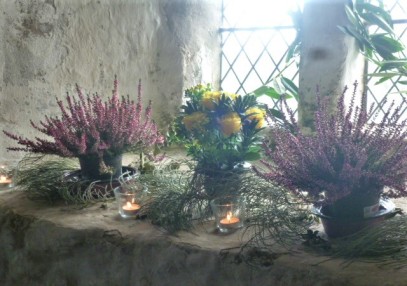 John and Meira Shakespear said “The Llangelynnin Harvest Festival was very successful, being well attended with Capel Meibion having to be used, as there was no space left in the nave. Everyone enjoyed the music and thought that the display of flowers and harvest produce was wonderful. There was a feeling of joy as people chatted over refreshments at Heather and Clive’s after the Service. Thank you to everyone who made it such a great occasion.”

The sunrise Easter Day Communion Service on 1st April will live long in our memories – its breathtaking beauty, capturing the awe, wonder and great joy of that first morning. This ancient Church was packed full of people singing praises to the risen Christ. Alleluia!

It was a beautiful, Autumn day on the 12th September 2018. A group, led by the Reverend Paul Flavell from St. Michael’s Church in Abergele, were welcomed to Llangelynnin Old Church by John and Meira Shakespear. John is the Church warden, and Meira plays the organ at some of the other Churches in the Conwy Valley. John showed the group the famous St. Celynnin’s Well, which was now half full after drying out in the drought. He gave a brief illustrated talk about the Church, highlighting some of its interesting features and spoke about the Church Services. The group retreated to the Churchyard to have their picnic lunch before Paul led a short Service. The party then walked down to their cars that were parked below Parc Mawr woods, having had a great day!

In June 2018, a group from our sister Church visited us. The group was led by the Reverend Lindsay Ford, from St. Celynnin’s Church in Llwyngwril in Meirionnydd. Following coffee at The Groes Inn, they had driven up the steep, narrow lane and walked the path to Llangelynnin Old Church. They were greeted at the ancient St. Celynnin’s Well by John and Meira Shakespear, who were able to tell them all about the well, the Church and our worshipping life together. Their bellringer, Maggie, rang the bell, which sounded across the hills, before Lindsay led a short Service. A great late lunch at The Groes Inn was enjoyed by all, before their trip home!