Cistercian monks marked out the foundations for Aberconwy Abbey in 1172, when it was just quiet farmland next to the River Afon Conwy. From 1186, the monks enjoyed nearly a century of simple life based on daily prayer, work and study. Aberconwy became the leading monastic community of North Wales, under the patronage of Llywelyn the Great Llywelyn ap Iorwerth, who died, and was buried in the Abbey in 1240. The Abbey’s famous library held laws and public records for the Princes of Gwynedd. The Abbots were key political figures in the power struggles that Wales was having with England at that time.

King Henry III’s army ransacked the Abbey in 1245. The Treaty of Aberconwy was signed in the Abbey in 1277, confirming the defeat by King Edward I. When he completed his conquest in 1283, he moved the monks to Maenan in the Conwy valley, and built an imposing castle next to the River Afon Conwy. The 13th century castle was hidden from any invaders that may have been sailing in the Irish Sea, and high walls were built around the town to fortify it. King Edward I built a fortress on the very site that was associated with Welsh pride and independence, because he wanted to assert his authority. Aberconwy Abbey became St. Mary and All Saints’ Church in the heart of the fortified town of Conwy. We now know and love it as St. Mary’s Church, a beautiful building in the heart of Conwy, a town that’s steeped in history, and a place where we are the custodians now. 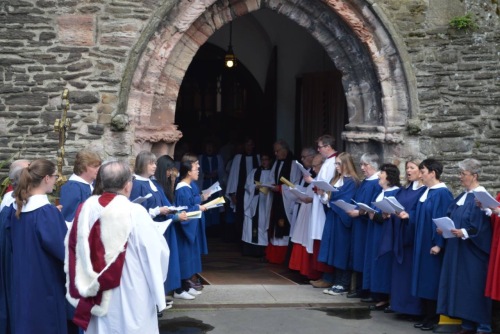 Since 1284, St. Mary’s Church has been the parish church of Conwy. The building has been adapted over the years to meet the needs of different generations. Traces of the original Abbey remain today, and it’s most evident when you approach the main entrance of St. Mary’s Church, in the thick tower wall, its three lancet windows and the arch. Cistercian encaustic floor tiles are also displayed in the Chancel and their beautiful design inspired the Victorian floor that you see today. The Mosaic Floor tiles are typical of the medieval period and Cistercian Abbeys. One of the Tomb recesses is 13th century. The South transept, porches, former charnel (burial) house, and part of the tower, are 14th century. There is an Ancient Chest in the Memorial Chapel that is believed to be 14th century, and the lid has been dated as 1631.

In the 15th century, the tower was finished, and we gained our present-day stone Font, with its heavily moulded bowl and octagonal base. The steps are thought to be from the marketplace cross. 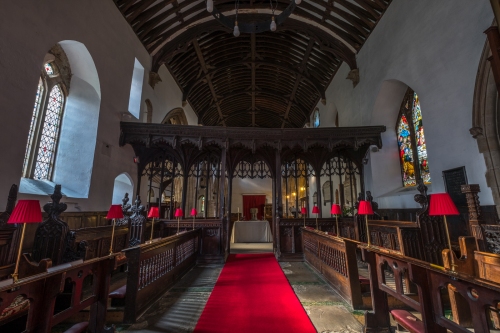 The choir stalls are also 15th century, with carved tracery, and ancient graffiti! 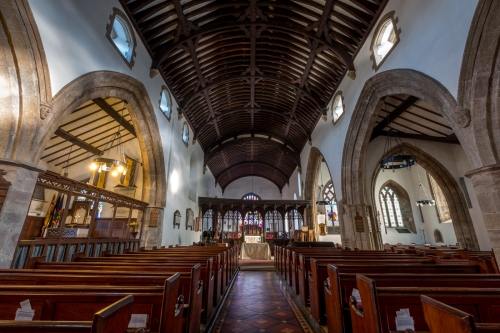 The Rood Screen is the best in Europe. The intricate 15th century craftsmanship marked the wedding of King Henry VII’s son Arthur (Prince of Wales) and Catherine of Aragon (Princess of Wales). She was three years old when she was betrothed to Arthur. They married in 1501, which was a Roman Catholic ceremony, but she was widowed five months later in 1502. She held the position of ambassador of the Aragonese Crown to England in 1507, which made her the first female ambassador in European history. She married Arthur’s younger brother Henry VIII of England in 1509, and became the Queen of England, making her the first wife of King Henry VIII. In 1513, she served as regent of England for six months when King Henry VIII was in France. During that time, the English won the Battle of Flodden, and Catherine of Aragon showed great leadership, and promoted courage among the people. She was held in high esteem by them. They had one daughter, Mary I of England, but King Henry VIII wanted a male heir. Pope Clement VII refused to annul their marriage, so King Henry VIII made himself the Head of the Church in England, and divorced Catherine of Aragon in January 1533, so that he could formally marry Anne Boleyn. They had a secret wedding prior to that in November 1532, and the Archbishop of Canterbury declared their marriage valid in May 1533. The Pope decreed sentences of excommunication, and there was a separation between the Church of England and Rome. Anne Boleyn became the Queen of England in June 1533, and she gave birth to the future Queen Elizabeth I in September 1533, 10 months after their secret wedding! 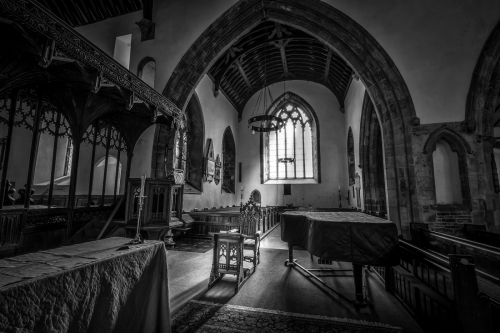 ‘Christ the Redeemer’ is a rare reproduction painting hanging in the South transept. The original was painted by Florentine artist Andrea del Santo (1486-1530). The side aisles and North porch changed in the 16th century. One of the Tomb recesses in the South aisle is an effigy of Mary, the mother of the Archbishop of York, John Williams (1581-1650). The Tomb of Robert Wynne (1598) is in the Chancel. He built Plas Mawr in Conwy, which is the best town house in Britain from Elizabethan times.

There’s a marble bust of the famous sculptor, John Gibson, in the South aisle. He was baptised at St. Mary’s Church in 1790. In 1872, a major restoration by Sir Gilbert Scott, raised the main Nave and Chancel roofs to a level above the original Abbey with many new windows. There’s a floor slab for Nicholas Hookes in the Chancel. He was the 41st child of his father! Nicholas himself fathered 27 children. In the 20th century, the Memorial Chapel and Choir Vestry were added, and ‘Mousey’ Thompson made new wooden altar rails. The mouse carvings were his trademark!

There’s a pair of windows made in the workshop of the Pre-Raphaelite artist Burne-Jones. There’s another pair of windows showing the translators of the Bible into Welsh, namely William Morgan and William Salesbury. In 1549, King Edward VI passed the Act of Uniformity, and it became law in 1552. There was a legal requirement for all acts of public worship to be carried out in English as opposed to Latin. The aim was to ensure that the Protestant Reformation, that had been introduced by King Henry VIII, was firmly cemented among the masses. It was a time when the English throne was under severe threat from the Catholics in Europe! However, the Act caused rebellion in parts of the land, because it signalled the end of the Welsh and Cornish languages. In Cornwall, thousands of Cornish speakers died during the protests. Wales had long been known as the backdoor for invasions on England, so in order to maintain the security of England, Queen Elizabeth I introduced legislation that superseded the 1549 Act of Uniformity. By 1567, there was a legal requirement for all Churches in Wales to have Welsh Bibles, as well as the Book of Common Prayer translated into Welsh. The Welsh versions sat alongside the English versions. Queen Elizabeth I knew that religious uniformity was more important than any linguistic uniformity, so by having the Welsh Protestant Word available in all the Churches in Wales, it meant that the people of Wales could use their own language Welsh Cymraeg, and they would be loyal to the Queen.

There’s a Medieval Processional Cross in the Chancel that was used in Monza Cathedral in Italy until the 18th century, and is still used today in St. Mary’s Church. 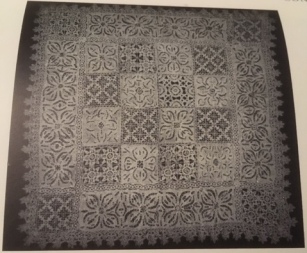 There are two panels of lace preserved in a case in the Parish Room, that were formerly used as ‘fair linen cloth and corporal’. They were given to the Church in 1787 by the Fitzhammond family.

St. Mary’s Church is still the spiritual heartbeat of Conwy, where worship has flourished for nearly 850 years. We are now part of a vibrant family of five congregations and two ‘Church in Wales’ schools, serving the town of Conwy and part of the Conwy valley.

All are welcome to visit this ancient holy place, whether Christian or non-Christian. The Church is steeped in history, and it is still growing and changing today.

May God bless you in this holy place.